At Echo Transportation, we don’t really claim to be experts on music. Sure, we equip all of our vehicles with state-of-the-art sound systems so that clients can listen to whichever genres or bands that they enjoy. But stuff like trivia, industry trends, and musical theory is a bit outside of our comfort zone.

One thing we do know a lot about, though, is destination and event management. We’re connoisseurs on the best routes to take and the best places to visit, and we have a fleet of buses and vans to help us serve parties of all sizes. Thus, we’re the perfect choice if you’d like to visit one of the annual music festivals that the state of Texas is so famous for.

Thinking about attending a live music event but not sure where to start? Here are our top picks:

In 1976, a television program devoted to showcasing Texas music first aired on KLRU, a PBS affiliate. The series was a runaway success and helped earn Austin the title of “Live Music Capital of the World.” In 2002, the show inspired the first of what would become an annual extravaganza: a three-day weekend of live music performances representing a nearly endless array of genres, as well as carnival food, art shows, and activities for adults and children alike. And in 2012, the festival was expanded into two consecutive three-day weekends.

To put it simply, Austin City Limits is the premier music festival in Texas. Every year, thousands of people from all over the country converge upon the city of Austin in order to join the party. Local bands on their way to “making it big” are still the main draw, but the event now features plenty of A-Listers, too!

South by Southwest (commonly abbreviated to SXSW) is another Austin-based event that features live musical performances. However, where SXSW really shines is in the sheer variety of creative expression that it includes. In addition to music, there’s film, theater, art installations, and even interactive digital media. You could go to SXSW several years in a row and have a completely different experience every single time! Plus, many of the exhibits are indoors, which can come as a relief in the unpredictable Texas climate.

In recent years, SXSW’s film festivals have gained a reputation for premiering brand-new films and TV shows. And not just experimental or indie flicks—attendees may be the first on their block to view major Hollywood blockbusters. There are also plenty of panels with celebrities and other industry players, where folks can watch live interviews (and learn behind-the-scenes info) about their favorite media franchises.

This concert isn’t exactly for the faint of heart, as River City Rockfest is a one-night celebration of rock music in all of its ear-shattering, pulse-pounding glory. Hard rock, heavy metal, industrial—there’s a sound for practically everyone, though you might want to bring earplugs, anyway!

Please keep in mind that River City Rockfest isn’t exactly “family friendly;” although children technically are allowed at the concert, their website specifically encourages patrons to leave their kids at home. Our advice? If you’re a parent or a caregiver, secure a babysitter ahead of time and treat yourself to a guilt-free night of screaming and foot-stomping (or, if you’re feeling particularly brave, moshing) with total impunity.

If nothing else, the Kerrville Folk Festival (KFF) deserves a spot on our list due to sheer longevity—this shindig lasts a full 18 days and nights! It’s also the longest-running music festival in the United States, having celebrated its 47th year in May of 2018. Don’t worry about fitting in with regulars, though: first-timers are always welcomed with open arms.

Unlike the other items on our list, KFF prides itself on being a laid-back, “chill” event in an all-ages environment. Along with live performances, the celebration hosts a variety of other activities, including beer and wine-tasting, music lessons, songwriting workshops, and yoga sessions. It’s not the kind of rip-roaring, booze-fueled, euphoric blowout that a lot of revelers associate with Texas music festivals, but for many individuals who dislike traditional concert experiences, it can be a refreshing change of pace.

Different people can have wildly different tastes in music, so it’s fortunate that there’s a live event to suit nearly everyone’s fancy. Regardless of whether you like indie, pop, rock or folk ‘tunes, though, there are a few things that we can all agree on. The first is that road trips are significantly less stressful when you hire a professional transportation planning service to get you where you want to go. And the second is that anyone tasked with chauffeuring you and other travelers to a venue should be courteous, professional, and punctual! 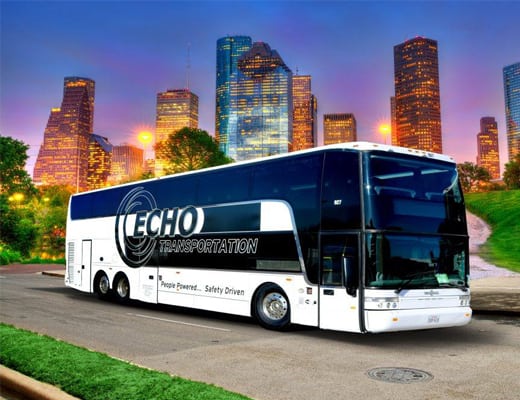 Again, we’re not really experts on music as an art form—we leave that sort of thing to folks who perform at the aforementioned events. But if you need experts in ground travel to help you get to the concert of your dreams, then Echo Transportation has your back!